Ok, no need to dwell on the obvious. We didn’t do well. Here is the short version of what happened.

First, we won the start!!! Very port end favored with a big ebb sweeping the fleet up to the line early.

We hit the pin at the gun and tacked on to port crossing the entire fleet!!

Should have called it a race right there! Actually, that’s not true. We enjoyed one of the best days of big boat racing that I can remember as our group of three NYYC 42s were stuck together like glue between the start and sunset. Lot’s of hard work and fun as we threaded our way carefully through the small boat divisions that had started in front of us.

We held the NYYC 42 lead through the entire day and only began to spread out sometime after midnight on that first night!!

Little did we know that we were already heading the wrong way, and options for recovery were going away fast!! 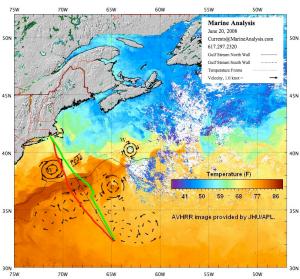 We had chosen to sail in a fast upwind mode. Not really worrying about pointing, as much as going fast and getting down the rhumbline. Our ultimate goal was to work West of the rhumbline in order to reach the edge of a favorable eddy on the way to the gulf stream. (red line) Our forecasts had convinced us that a 20+ degree lift was on the way, so not wanting to tack 90 degrees off the course to Bermuda, we and our NYYC 42 competition waited for it as we worked our way towards Bermuda.

Unfortunately, that lift never came and by the time we figured that out, it was too late to recover. We ended up missing the +3-4 knot eddy completely, and entering the gulf stream itself to the East of Rhumb in an section moving to the Northeast. (green line)

We were dead, and worse that that, we knew it!!

While the conditions remained relatively moderate for the entire race, it was all uphill and to have any chance at all we needed weight on the rail night and day.

Sleeping below was discouraged strongly, and crew moral suffered when some chose to ignore the skippers request and were regularly spotted asleep below.

A rare site! Danny was the winner of the Golden Pillow Award for the race.

Most of us toughed it out through a couple of the most awful cold and wet nights I can remember on a boat.

Our alcohol stove caught on fire the second night out, so that was the end of warm food, and without the ability to boil water for hot drinks we froze on the rail.

Huge compliments and thanks to the Mutiny crew members that toughed it out those nights!! Undoubtably, that experience will be the source of many hilarious stories once we put some time between us and the race.

The last evening prior to the finish the shift to the Southwest came through (bigger than forecast) and we were finally able to enjoy some fast and comfortable reaching conditions on our way into the finish line.

What we did well

Where we went wrong