Just returned home from this years slow (especially for us) Bermuda Race.

Have had a few complaints regarding lack of blog postings, so will try to throw up a couple of quick summary posts now with lot’s of pictures.

I sailed with Gibb Kane and Ted Madera on Mutiny, one of five NYYC 42’s to enter the race. Gibb and Ted were kind enough to ask a couple of other Morpheus regulars (Rob Moore, Joe McCoy) along for the ride.

While the race didn’t ultimately turn out well for us, we sailed with a good group and hopefully learned some lessons that will pay off in the future.

We’re not sure, but perhaps over time, our memory of the race itself will fade enough that we might even do it again. 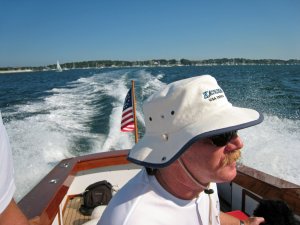 Lucky for us, Mutiny was well prepared for the race and we had some time off to enjoy a great harbor cruise with Lyn Comfort on his new toy. What a beautiful boat!!

Lyn dropped us off at the NYYC 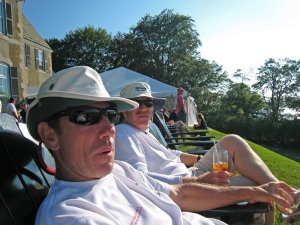 Where we enjoyed a few cold beverages 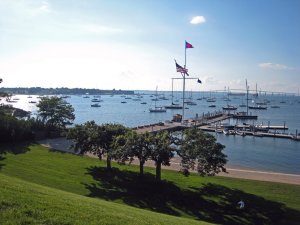 While enjoying one of the best views that our sport has to offer.

Joe hadn’t been to Newport too many times, so we decided to walk back to the hotel after leaving the NYYC.

I slipped into tour guide mode and we made a couple of stops along the way.

And, our second stop was one of my long time favorites, the White Horse Tavern which claims to be the longest continuously operating tavern in the United States. A great spot!!

After a casual pre-race crew dinner, it was finally time to go racing….