As we sailed in Tuesday afternoon soaking wet and cold from the afternoon’s rains we received notice that Wednesday’s winds were forecast to be very very light and that the day would be a non-race day or layday.

The option of a layday was a return to the “old days” where at the discretion of the race committee races would be canceled on any given day deemed a “poor sailing day”.  Back then there were organized volleyball tournaments, small boat and windsurfer sailing opportunities, and skeet shooting!!

This year layday option was the result of a survey taken after race week two years ago, and while a layday giving everyone a bit of time to explore the island was a popular option, not everyone agreed.

A couple fleets argued that they were there to race and the option of a day on the island was absolutely not why they had taken time off from work, etc. etc.  Eventually, the organizing committee agreed to provide racing for any fleet/division that wanted to race that day.  I got a bit of a laugh out of the fact that the wind never came up and even those boats which had to remain on standby for half the day never got a race in.

Anyway, onboard Morpheus after running the heater on high all night in an attempt to dry things out, I woke up and spent the first half of the day cleaning up the big mess left over from the previous day’s race in the rain.  (For some reason, torrential rains convinced us that we should leave things as they were the day before, rather than cleaning up in the rain.) 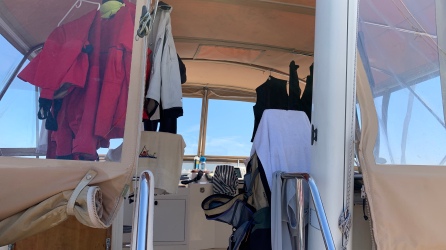 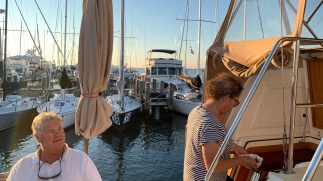 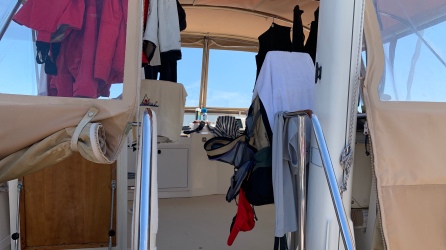 Our official team lay day activities began with a lunch on the outside deck at the National Hotel overlooking Old Harbor, and then moved on to drinks at the Spring House, a bike ride around part of the island, and then concluded with dinner (and a few mudslides) at the Oar with our crew and Gibb Kane and his gang of sailors.

It was a good day…