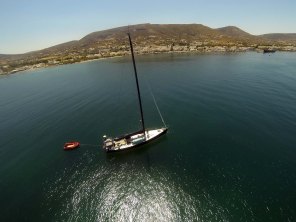 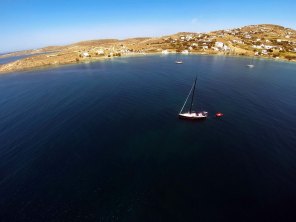 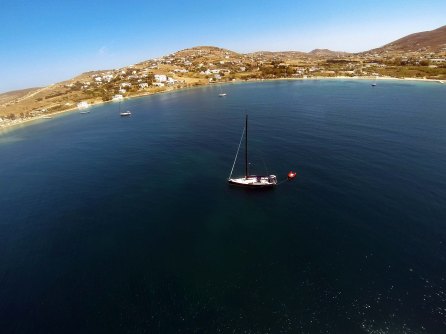 Other than playing with the new drone Deb got me for Christmas this morning, today has been pretty much a work day.  It wasn’t really planned to be, but last night turned into a bit of a project.

Nothing surprising here, just life as it is on a boat!  Read on if you are interested in a bit of cruising reality.  It’s not all beaches and history lessons…

Last week, I followed through on a project that I’d been putting off for years, and replaced the membrane filter in our water maker.  I was terrified to commit to this project, because I knew that if I screwed it up the water maker would be toast, and I’d be carrying jugs of water out to the boat for months.

Well, the actual process of changing the membrane turned out to be fairly simple.  Once completed the water maker was up and running and the quality and quantity produced was far superior to where we started.

But…during the week that followed, I noticed that the quality of the water being produced was degrading rapidly.  At first, I ignored it.  Naturally.  But, with each day the problem seemed to become worse and finally last night I decided to track the issue down.  It wasn’t where I thought it would be…

The membrane and all connections check out fine.  The voltage (especially with the engine running – we’ll get back to this later.) was fine.  But, I did notice an unrelated issue where air was being sucked in through the service port??  This was strange since valves were positioned so that this service port should be totally out of the picture.  But, what happens when your salt water supply valve get partially clogged??  Well, the feed pumps don’t slow down, so they keep sucking and if they can’t get enough water, then they start testing the rest of the system to see what they can pull it.  Air in this case!!

The salt water supply valve clog was where I ended up, not where I started by a long shot.  It certainly was the problem and my watermaker started putting out perfect water as soon as I fixed it.  But, it took a couple of hours to track it down and fix it.

I spent a ton of time working backwards from the feed pumps trying to locate the problem.  This is where the the “engine running” part enters the story.

So, if I had two minutes to celebrate my victory over the watermaker I would be surprised.  Half way to the icebox for a celebratory beer, and suddenly the water pressure pump starts running and no pressure in the fresh water system.  Ah…these greek gods are messing with me!!

Again, we started with the wrong assumption.  No pressure in the pump normally means no water in the supply tank.  But…we checked and the tank was at least 1/2 full.  Now what??  Maybe the pump is shot??  Pull it apart, check pressure and suction side.  All good!

Right about then the bilge pump starts running!!  (Notice all of these issues are water related.)  Ah!  The light bulb comes on.  I’ve seen this picture before.  And yes, a quick trip aft to check the aft locker below deck confirms that what is supposed to be a dry area, is now full of five gallons of steaming hot water and then some additional cold water as well.

What happened?  Well, we ran the engine for two hours.  When the engine runs we make hot water.  The hot water tank hoses are reinforced rubber and are pressurized.  Unfortunately, one particular hose seems to have reached its end of life time.  With the extra hot water from the engine it failed, and failed spectacularly.  There was water everywhere!

Temporary repair was easy, just cut two inches off the bad end of the hose and re-attach.  I know this is not a “fix”.  Hopefully, this repair will hold until we can get a new hose.

Once the water system all came back online, I finally made it to that celebratory beer.  The only problem left was that I was in serious need of a shower and of course there was no hot water!!