The Egadi Islands are located off of the NW corner of Sicily.  They are part of a large marine nature preserve, and are a beautiful place to spend a few very lazy days. 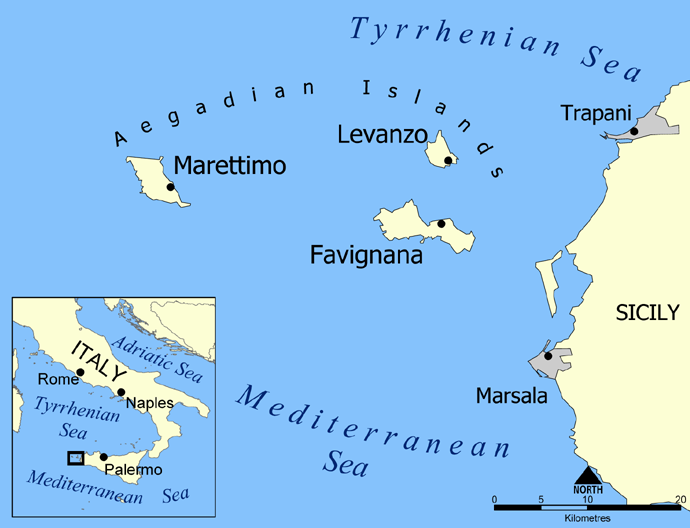 On 10 March 241 BC, a major naval battle was fought a short distance offshore between the two powers. Two hundred Roman ships under the consulGaius Lutatius Catulus met and decisively defeated a much larger Carthaginian fleet of 400 ships, with the Romans sinking 120 Carthaginian vessels and taking 10,000 prisoners. So many dead Phoenicians washed ashore on the northeastern part of Favignana that the shoreline there acquired the name “Red Cove” (Cala Rossa) from the bloodshed. The Romans took possession of the island under the terms of the treaty that ended the war.

During WWII, American Forces under Gen. Patton drove the Axis forces from Sicily. Two American officers, Lt. Louis testa, and Capt. R.E. Gerard, were a two-man ‘expedition’ which ‘captured’ three Italian Egadi Islands and 1027 prisoners. The officers went over from a Sicilian fishing boat, which they paid $3. They went ashore on Favigna Island and the Italian Lt. Colonel surrendered it along with Levanzo and Marittimo Islands and their garrisons.

We enjoyed the swimming in clear water over white sands, and did a bit of exploring while we were here.  Beside tuna fishing, quarrying at one time provided the island with the majority of its income. Huge blocks were cut from the cliffs and then transported elsewhere in Sicily and exported to North Africa. These quarries are hard to miss.  From the water, it appears as if great chunks had been bitten out of the hillside by some large square-jawed monster.

Given the near empty status of our fridge and freezer it was time to move on yesterday.  We are now docked off the port city of Trapani only 8 miles away.  Trapani is a big city and doesn’t compare well with what we’ve just left behind.  But the old mountain top city of Erice is very nearby and a pretty fantastic place.

More on that later…