Skip to content
Morpheus has left the Atlantic Ocean behind!!  And…it was an easy trip!!

We are now docked for a day or two under the shadow of the Rock of Gibraltar.

If you like history, then you would have enjoyed the past two days on Morpheus.  We basically followed a route that took us across all the important areas involved in Battle of Trafalgar.

The Battle of Trafalgar (21 October 1805) was a naval engagement fought by the British Royal Navy against the combined fleets of the French Navy and Spanish Navy, during the War of the Third Coalition (August–December 1805) of the Napoleonic Wars (1803–1815).
The battle was the most decisive British naval victory of the war. Twenty-seven British ships of the line led by Admiral Lord Nelson aboard HMS Victory defeated thirty-three French and Spanish ships of the line under French Admiral Pierre-Charles Villeneuve off the south-west coast of Spain, just west of Cape Trafalgar. The Franco-Spanish fleet lost twenty-two ships, without a single British vessel being lost. 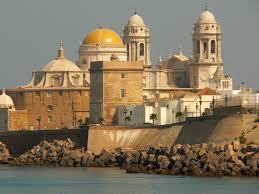 We left Cadiz (the oldest continuously inhabited city in Europe), in the morning and headed South towards Cape Trafalgar and ultimately the Straits of Gibraltar.  Cadiz was also the home port of the combined French/Spanish Naval Fleet that eventually did battle with England’s Lord Nelson and the British Royal Navy.

Our route took us along the very route that the French/Spanish Fleet sailed while trying to avoid the British Fleet and get to the Straits of Gibraltar.  We were a bit more successful at achieving our goals than they were.

As planned we stopped and anchored last night in a beautiful cove just South of Cape Trafalgar.  The cove was off the town of Bolonia which is home to the most complete set of Roman Ruins found in Spain.

This morning we were up early and underway as the sun rose in 0-5 knots of wind.  Perfect conditions to make our way past the windy kite surfing paradise of Tarifa and on through the Straits of Gibraltar with 3 knots of current behind us.  (Sometimes you just get lucky!)

We will probably stay here for two more days and then its on into the Med proper and slowly up the coast of Spain.