Have you ever been picked up at the airport in a dingy? 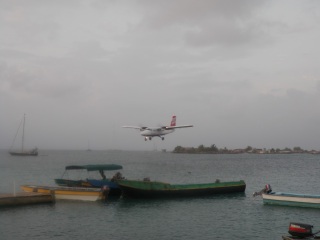 Well that is how brother Jim met me at El Porvenir airport in the San Blas islands. Culture shock was just beginning. While some previous visitors had departed from this island which is landing strip from waters edge on each side, I was the first to land here

Since my main purpose was to assist on the next leg of the voyage to lands still undecided I received the readers digest abbreviated tour of the San Blas. Beer before 1000 seemed like a good idea although it was 0700 my time. We moved to their favorite set of islands, anchored and then got in the dingy to visit the favorite islands and sand bars with Ita leading the charge.

We left Rum Island for last and thankfully I had restocked the rum supply.

Next morning was voyage prep time. In a daze of jet lag, alcohol, and sea sick meds I started our voyage. How many people get in their vehicle and drive for 2 days before they decide where they are going. That’s what we did, we had four potential destinations, but ultimately Grand Cayman was chosen because we could get there comfortably.

Comfort was the overriding theme of the voyage, not speed. This was a hard concept for me having spent most of my time on Morpheus driving her hard to win the race, but this race was to be won by the boat not breaking and the crew being happy. Three hour watches followed by six hours of watch. “Auto” drove so the only real responsibility on watch was look out and to keep everyone comfortable. If the ride is too bumpy slow down and sail with main alone. Morpheus has a hard time with slow though because even with a double reefed main alone we easily made close to six knots.

As with most trips on Morpheus she likes to arrive in the wee hours of the morning and this trip was no exception anchored around 0400.  After a short nap we awoke and found four cruise ships anchored within a mile of us. How did they sneak in when we were sleeping?

The next three days were spent exploring the islands(got lost in a mangrove park), the bars, and the duty free shops. Oh and also pointing out the definite cruise ship folks. Every morning at 0800 the island population swells by 8,000 to 12,000 cruise folks for duty free shopping.

Tomorrow is go home day. After arriving home I have 8 hours to sleep and transition back to a working man. What will shoes and socks feel like. Also not to sweat off your body weight daily?