The 4th-century Panagia Ekatontapyliani (Our Lady of a Hundred Doors) is the oldest remaining Byzantine church in Greece. According to legend, 99 doors have been found in the church and the 100th will be discovered only after Constantinople is Greek again.

In 326, St. Helen, the mother of Emperor Constantine the Great, sailed for the Holy Land to find the True Cross. Stopping on Paros, she had a vision of success and vowed to build a church there. She founded it but died before it was built. Her son built the church in 328 as a wooden-roof basilica. 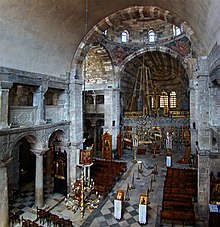 Two centuries later, Justinian the Great, who ruled the Byzantine Empire from 527 to 565, had the church splendidly rebuilt with a dome. The emperor appointed Isidorus, one of the two architects of Constantinople’s famed Hagia Sophia, to design it. Isidorus decided to send an apprentice, Ignatius, to Paros.

Folk legends say that, upon its completion, Isidorus arrived in Paros for an inspection and discovered the dome to be so magnificent that, consumed by jealousy, he pushed the young apprentice off the roof. Ignatius grasped his master’s foot as he fell, and the two tumbled to their death together.

The cathedral is hidden behind its high, thick wall, built to protect the shrine from pirates and other marauders. Cut into the wall are rows of monks’ cells, some of which now house offices and a shop and ecclesiastical museum