Just like water (there is the tie in with sailing) Cal Football has a way of seeking its own level!!
Last night as we sat there watching the battle between Cal and Oregon State, we had it all there for the taking!! We were ranked second behind LSU. LSU had just lost to Kentucky. Oregon State was unranked, and we had every reason to think that we might end that game with a legitimate stadium rocking “We’re number one!!” cheer.
Every reason that is except for two. First, Oregon State was playing well and spent much of the game ahead. And, second….our starting QB was out and we were playing with his backup. A backup that was a redshirt sophomore and had never thrown a pass in a PAC-10 game prior to this game!!
In the end, shortly after being down by 10 points, we scored once to reduce the Oregon St. lead to 3pts. We then drove 75 yards to the 15 yardline with 14 seconds left on the clock.
What happened next??
I’d love to tell you that we understood that with 14 seconds, no timeouts, down by three, and with a “freshman” QB playing his first game that we did the safe thing and kicked the field goal to tie and go into overtime. I’d really love to tell you that….. But, no….this is Cal Football!! Something ALWAYS happens as my brother Bob loves to point out!!
So no, with 14 seconds left the coach decided to try for one more shot at the endzone, and for some unknown never to be explained reason that freshman QB decided to run with the ball rather than throw it away when he saw he didn’t have an open reciever!!!
What happened??? What do you think happened? The QB got tackled, the clock ran out, and 70,000 people stood stunned not knowing what to do.
We had just lost our shot at the national championship, and perhaps one of a very few legitimate chances at the Rose Bowl in my lifetime!!!
Somehow, I thought it would end differently…. 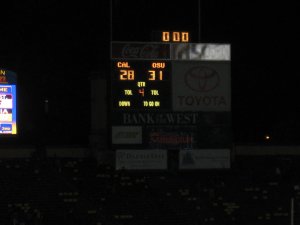